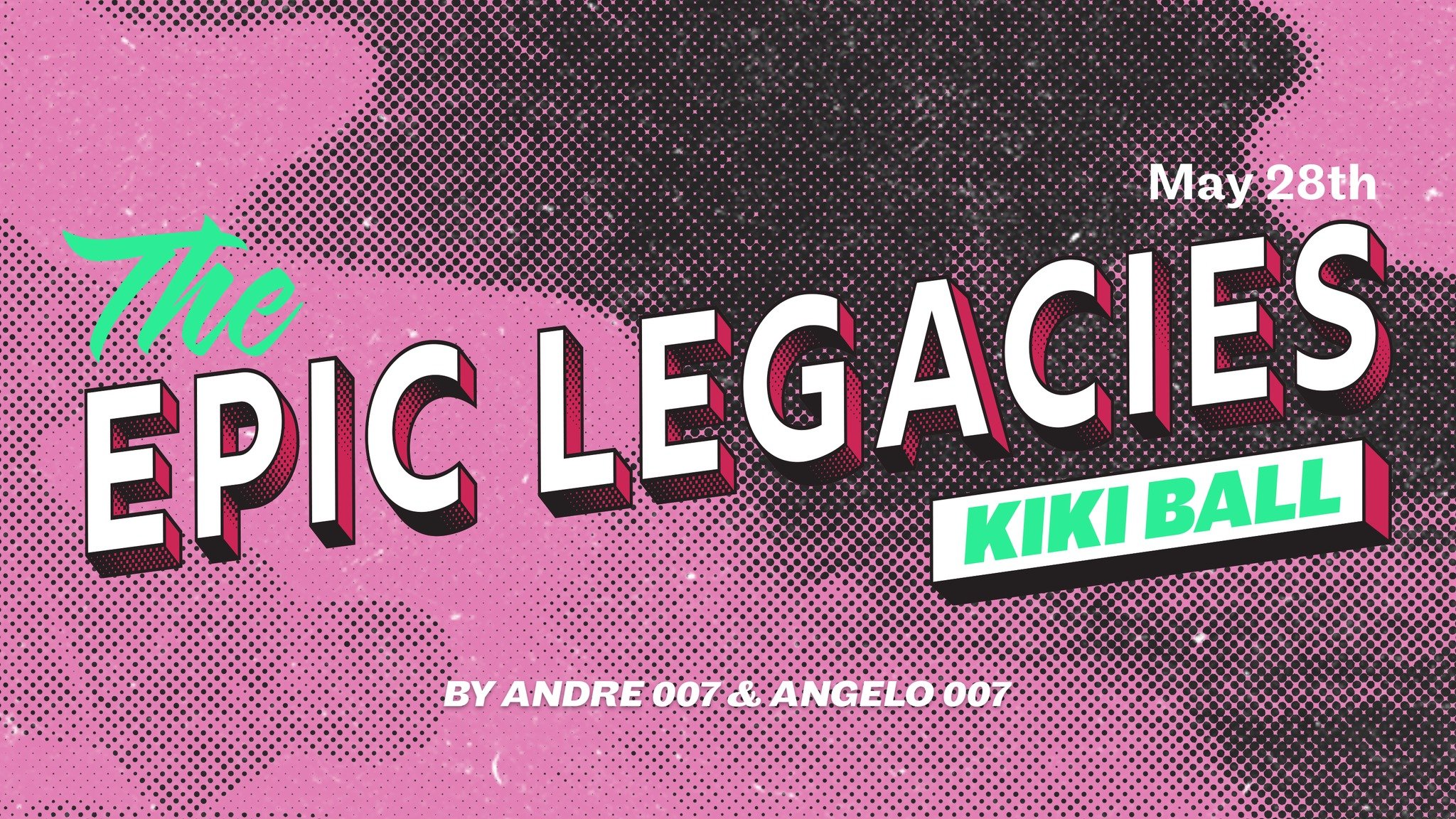 Andre 007 and Angelo 007 present to you, on behalf of the
Utrecht Ballroom Scene:

Tonight, we celebrate the legacies of queer and trans people of the past and present who have made an impact on the world. We center Black women who have fought for our rights, trans activists, influential figures in music and media, powerful sex symbols, ballroom icons, people who have pushed boundaries in their time, and those that are doing it right now.
We are excited to bring you the first (kiki) ball organised by members of the Utrecht Ballroom Scene.

FOR WALKERS:
Please register to walk via this Google form:
https://bit.ly/utrechtkiki2022.
If you have any questions, please contact us via utrecht.ballroom@gmail.com.

FOR SPECTATORS:
“Spectators” is another word for “audience members” in the ballroom scene, whereas “walkers” are the performers.
Everyone is welcome at our kiki ball, but please be aware of the history and culture of ballroom. Voguing emerged from the ballroom culture in New York from the 1960s throughout the 80s. It was largely created by Black and Brown trans women as a safe space for queer and trans people of colour. This kiki ball invites people from all identities to celebrate queer and trans excellence, but centers and prioritises those who ballroom was created for.

PRACTICAL:
Date: Saturday evening, May 28th.
17:30 Doors open for Walkers
18:00 Doors open for Spectators
18:30 LSS starts
19:00 Ball categories start
22:45 Ball ends
Please note that we will begin the LSS at 18:30 sharp, so please do not be late. We need to be on time as another (techno) party starts in the club at 23:00.
Location: Club BASIS, Oudegracht aan de Werf 97, Utrecht. An underground club by the water. Take the stairs from the street down to the waterside.

Gladys Bentley was a Blues singer during the Harlem Renaissance. Gladys defied many social and gender conventions of the 1930s and 1940s: being very outspoken about their love for women, singing raunchy songs and wearing traditional “menswear”.
For this category, bring it in a suit that Gladys would have rocked.
European Runway: Dominique Jackson

Dominique Jackson has been a part of the ballroom scene in the United States since the early 90s. She is a trans icon, model, and actress, most famously known for her role as ‘Elektra’ in POSE. This category is inspired by her “Get the shoes baby, get the shoes” videos on social media.
For this category, walk in a cute pump and make us get the shoes, baby.
— Update: Runway categories are not Tag Team anymore. —
OTA BEGINNER’S PERFORMANCE: Keith Haring
Keith Haring was a pop artist, whose artwork often focused on homosexuality, safe sex, HIV/AIDS awareness, and depicting joyful gay love at a time when it was becoming feared. He set up the Keith Haring Foundation to support underserved children and AIDS organizations, a charity which still operates today.
For this category, bring it in a monochromatic look (1 color) inspired by Keith Haring’s art. Shoes can be in a different colour.
Old Way, New Way, Vogue Fem

FACE: Marsha P. Johnson
Marsha P. Johnson was an activist, a trans woman most famously known for her role in the Stonewall riots in 1969. But even beyond this important moment of LGBTQ+ liberation, she has been a pillar of her community. Through her organisation Star House, she provided housing, clothing and food to young queer and trans people in New York. All Face categories are inspired by one of Marsha’s photos with flowers in her hair.
For this category, serve face with floral elements.
FF, MF, NB

Phyllis Akua Opoku-Gyimah, also known as Lady Phyll, is a British political activist and the co-founder of UK Black Pride. Lady Phyll is known for her activism on race, gender and LGBTQ+ rights in the UK, and is considered one of Britain’s most prominent lesbian activists. This category is inspired by Lady Phyll’s fashion.
For this category, bring it in a beret.
New Way: David Bowie

David Bowie was a British singer who was one of the most influential artists in rock music. Coming out in 1972, he used his platform to redefine perceptions of queer people. Androgynous, glamorous, Bowie became the symbol of queer expression as something rebellious and powerful. This category is inspired by David Bowie’s ‘Aladdin Sane’ album cover.
For this category, bring it with a red lightning bolt on your face.
– (BREAK) –
Vogue Fem: Leiomy Maldonado

Leiomy Maldonado, also known as the “Wonder Woman of Vogue”, a ballroom Icon, mother of the House of Amazon is one of the most known Voguers due to her mainstream success as a Judge in Legendary, choreographer and cast member of POSE, participant in America’s Best Dance Crew and collaborations with many celebrities.
For this category, bring it in an effect inspired by any of Leiomy’s looks AND/OR do some signature Leiomy moves. You can choose either of the two, or do both.
BODY: La Veneno
Cristina Ortiz Rodríguez, also known as La Veneno, kickstarted her career as a sex worker. After a TV appearance in 1996, she went on to become a media personality in Spain, a famous singer and actress, and one of the first trans women to become widely known in the country.
All Body categories are inspired by one of La Veneno’s most famous looks: bring it in any red effect.
MF: Models, Big Boy

Montero Lamar Hill, also known as Lil Nas X, is a rapper who not only makes catchy songs, he also creates music videos and serves performances that are beautifully, radically queer, and gets people talking.
Male Figures and Catboys, bring it in a hot pink effect, inspired by the Industry Baby music video.
FF: Amanda Lepore

Amanda Lepore is a trans model and singer who was at the center of the club kid era. Known around the world, she continues to be a prominent figure in New York nightlife. Amanda often describes herself as a “living doll” and has described the cartoon “Jessica Rabbit” as her inspiration.
For this category, bring it in bright red lipstick and sexy lingerie.
Lion Babe: Thorn Vineyard

Thorn de Vries, also known as Thorn Vineyard, is an actor known for their role in the Dutch television series SpangaS: De Campus, and the movie ANNE+. Thorn is the first non-binary actor in a Dutch movie. They are an activist, drag king, member of the Dutch Ballroom Scene and of the House of Vineyard. Thorn was the first to walk the “Lion Babe” Sex Siren category.
For this category, bring it in an effect inspired by any of Thorn’s looks.
+ Add to Google Calendar+ Add to iCalendar
TICKETS